This section is dedicated to all general concepts about Xen Orchestra backups.

This is the welcome panel for the backup view. It recaps all existing scheduled jobs. This is also where the backup logs are displayed.

All the scheduled operations (backup, snapshots and even DR) are displayed in the main backup view.

A successful backup task will be displayed in green, a faulty one in red. You can click on the arrow to see each entry detail.

You also have a filter to search anything related to these logs.

Logs are not "live" tasks. If you restart XOA during a backup, the log associated with the job will stay in orange (in progress), because it wasn't finished. It will stay forever unfinished because the job was cut in the middle.

Each backups' job execution is identified by a runId. You can find this runId in its detailed log. 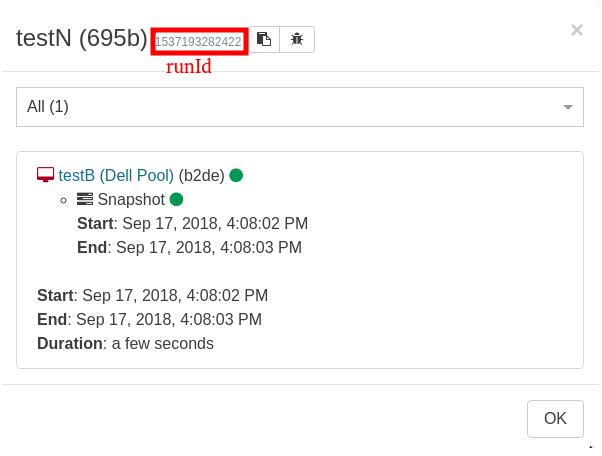 During a backup job, you can avoid saving all disks of the VM. To do that is trivial: just edit the VM disk name and add [NOBAK] before the current name, eg: data-disk will become [NOBAK] data-disk (with a space or not, doesn't matter).

The disks marked with [NOBAK] will be now ignored in all following backups.

👷 This section needs to be completed: screenshots and how-to 👷

There are two ways to select which VMs will be backed up:

Picking VMs manually can be a limitation if your environment moves fast (i.e. having new VMs you need to backup often). In that situation you would previously need to constantly go back and edit the backup job to add new VM's.

But thanks to smart backup, you now have more flexibility: you won't select specific VMs, but VMs status/tag/placement at the time backup job will be executed. Let's see some examples!

# Backup all VMs on a pool

This job will backup all VMs on a pool "Lab Pool" when scheduled:

You now have the ability to intelligently backup VM's in production pools!

Want to narrow the job a bit? See below.

Remember the Prod VMs? I added a tag "prod" to each of them:

Now if you do this: 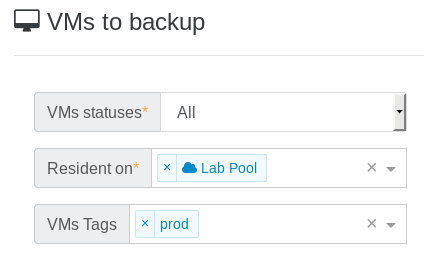 It means any VMs on "Lab Pool" with the "prod" tag will be backed up.

This feature is only compatible with XCP-ng 8.0 or more recent. Citrix Hypervisor didn't yet merge our changes, despite we contributed to their code directly.

XCP-ng modified XAPI is now able to create VMs in a Suspended state with a suspend_VDI property set. When a VM is suspended, all of its memory contents are written into a disk called suspend_VDI. When the VM is restored, the suspend_VDI is read to recreate the memory of the VM. Once the resuming is done it's as if the VM was never suspended.

It is already possible to snapshot a VM with its RAM, however when restoring a VM, the VM was created in the Halted state so it wasn't possible to restore the VM with its RAM. With our XAPI modification a VM can now be created in a Suspended state with preset memory contents, so when snapshotting a VM with RAM, the snapshotted VM will also have the RAM contents set.

This can be very useful when you're running a VM that needs RAM coherence to run:

In a nutshell this functionality can be seen as hot copy, similar to hot migration but the original VM is not deleted.

This feature allows you to regularly send a copy of a VM to a target SR. The copied VM will be Suspended and ready to be resumed if the original VM encounters issues. As the copied VM is Suspended, no reboot will be required, resuming it is much faster.

For instance, if an hourly continuous replication is configured on a VM, if the VM is lost, you can quickly resume a running VM with a memory loss of one hour tops.

This feature is being deprecated in XCP-ng and Citrix Hypervisor. It's now replaced by RAM enabled backup!

All backup types rely on snapshots. But what about data consistency? By default, Xen Orchestra will try to take a quiesced snapshot every time a snapshot is done (and fall back to normal snapshots if it's not possible).

Snapshots of Windows VMs can be quiesced (especially MS SQL or Exchange services) after you have installed Xen Tools in your VMs. However, there is an extra step to install the VSS provider on windows (opens new window). A quiesced snapshot means the operating system will be notified and the cache will be flushed to disks. This way, your backups will always be consistent.

The tooltip confirms this:

Remotes are places where your backup and delta backup files will be stored.

To add a remote, go to the Settings/Remotes menu.

On your NFS server, authorize XOA's IP address and permissions for subfolders. That's all!

For continuous delta backup, SMB is NOT recommended (or only for small VMs, eg < 50GB)

Also, read the UI twice when you add an SMB store. If you have:

PATH TO BACKUP is only needed if you have subfolders in your share.

This is for advanced users. Using the local XOA filesystem without extra mounts/disks will use the default system disk of XOA.

If you need to mount an unsupported store (FTP for example), you can always do it manually:

Any Debian Linux mount point could be supported this way, until we add further options directly in the web interface.

All your scheduled backups are acccessible in the "Restore" view in the backup section of Xen Orchestra.

You can restore your backup even on a brand new host/pool and on brand new hardware.

You can also restore specific files and directories inside a VM. It works with all your existing delta backups.

File level restore is only possible on a single VDI, it does not support LVM Volume Groups that span multiple VDIs.

Go into the Backup/File restore section: 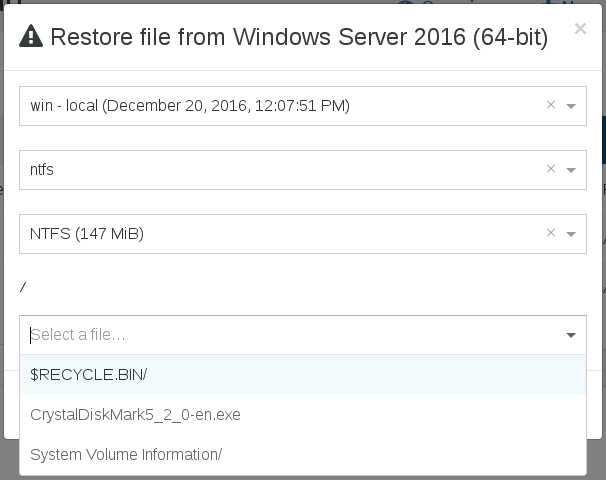 That's it! Your chosen file will be restored.

By default, Backups are compressed (using GZIP or zstd, done on host side). There is no absolute rule but in general uncompressed backups are faster than GZIP backups (but sometimes much larger).

However, XCP-ng is using zstd, which is far better.

If you have compression on your NFS share (or destination filesystem like ZFS), you can disable compression in Xen Orchestra.

# Add a disk for local backups

If you want to use XOA to locally store all your backups, you need to attach a large disk to it. This can be done live.

First, after your disk is attached to XOA, you'll have to find the new disk name with fdisk -l. It's probably xvdb.

Then, create a filesystem on it:

If you already have backups done, you can move them to the new disk. The orignal backups folder is in /var/lib/xoa-backups.

To make the mount point persistent in XOA, edit the /etc/fstab file, and add:

This way, without modifying your previous scheduled snapshot, they will be written to this new local mountpoint!

Replicated VMs HA are taken into account by XCP-ng. To avoid the resultant troubles, HA will be disabled from the replicated VMs and a tag indicating this change will be added.

The tag won't be automatically removed by XO on the replicated VMs, even if HA is re-enabled.

Xen Orchestra 5.20 introduces new tools to manage backup concurrency. Below is an overview of the backup process and ways you can control concurrency in your own environment.

When you perform a backup in XCP-ng/XenServer, the first operation performed is to "freeze" the data at a specific time - this is done by making a snapshot. This operation is pretty quick, only a few seconds in general. However it uses a lot of I/O on your storage, therefore more I/O activity means longer times to snapshot. Still, the order of magnitude is seconds per VM.

When it's done exporting, we'll remove the snapshot. Note: this operation will trigger a coalesce on your storage in the near future (a coalesce is required every time a snapshot is removed).

Concurrency is a parameter that let you define how many VMs your backup job will manage simultaneously.

The first purely sequential strategy will lead to the fact that: you can't predict when a snapshot of your data will occur. Because you can't predict the first VM export time (let's say 3 hours), then your second VM will have its snapshot taken 3 hours later, at 6 AM.

If you need your backup to be done at a specific time you should consider creating a specific backup task for this VM.

Strategy number 2 is to parallelise: all the snapshots will be taken at 3 AM. However it's risky without limits: it means potentially doing 50 snapshots or more at once on the same storage. Since XenServer doesn't have a queue, it will try to do all of them at once. This is also prone to race conditions and could cause crashes on your storage.

By default the parallel strategy is, on paper, the most logical one. But you need to be careful and give it some limits on concurrency.

High concurrency could impact your dom0 and network performances.

So to summarize, if you set your concurrency at 6 and you have 20 Vms to backup the process will be the following:

Removing the snapshot will trigger the coalesce process for the first VM, this is an automated action not triggered directly by the backup job.

When a backup job is configured using Normal snapshot mode, it's possible to use VM tags to apply a different snapshot mode to individual VMs.

For example, you could have a regular backup job with 10 VMs configured with Normal snapshotting, including two which are database servers. Since database servers are generally more sensitive to being restored from snapshots, you could apply the xo-memory-backup tag to those two VMs and only those will be backed up in RAM-enabled mode. This will avoid the need to manage a separate backup job and schedule.