In this post, we'll see how to activate the Wake-on-LAN (WOL) on XenServer.

Naturally, it depends of your hardware configuration. If you don't have any Server Manager Tool, like iLO (HP) or iDRAC (Dell), you can count on the WOL feature of your network card.

In our lab, we got basic hardware: ITX cards and Core i5 CPU, not the kind of hardware you'll find in a data-center, but it's compatible with WOL.

XenServer 6 is based on CentOS. By default, when you shutdown the host, it doesn't activate the network card. In this case, you can't wake the box, because your interface is completely off. So, we need to configure it:

But if you want to do this permanently, this command will do the trick:
echo '/usr/sbin/ethtool -s eth0 wol g' >> /etc/rc.d/rc.local

Now, when the system shutdown, it's ready to listen for a WOL packet.

But that's not enough to start a server using Xen Orchestra or XenCenter. You need to tell the XAPI how to wake it: because we saw there is different options to do that (WOL, iDRAC/iLO, even custom scripts).

Again, go in SSH on your host (or any host in the pool) and use this:
xe host-set-power-on-mode uuid=<MyHost_UUID> power-on-mode=wake-on-lan

For people using iDRAC or iLO, just replace wake-on-lan by DRAC or iLO respectively, but that's not all. You need to give to XAPI the IP and the credentials of your Server Manager Tool. The command will look like this:
xe host-set-power-on-mode uuid=<MyHost_UUID> power-on-mode=DRAC power-on-config=xx.xx.xx.xx, user, password with xx.xx.xx.xx the IP of your DRAC controller. For iLO, just replace DRAC by iLO. That's it!

Since the 3.5.2 release, you'll see a Start button in the host menu if your host is Halted. Just click and you can boot it. 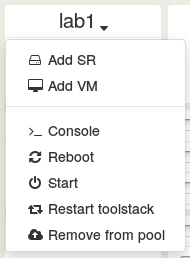 Now, you can imagine what it's possible to do in XO with this kind of feature: