When you are performing a full VM backup, you want it to be done fast and efficiently (small file size). But until today, you only had 2 options:

Exports: one order of magnitude faster

What if we found a solution that's the best of both worlds? Ultra fast AND with better compression? That's exactly what we achieved in XCP-ng, in its last update (available in XCP-ng 7.6 very soon): this new extra compression method is both faster and outputs smaller files. And it beats the default XenServer compression by an order of magnitude.

Here is a benchmark on a 12 core setup with NVMe drives:

The new compression in XCP-ng is 11,5 times faster than XenServer default compression, and still deliver a 10% smaller file.

Against uncompressed export, it's still faster, but more interestingly 50% smaller.

Testing on a local drive is more theoretical. What about a test that's more closer to the truth, ie an export toward a NFS share? Let's run the numbers again! Let's compare total backup time accross a NFS behind a Gbit network:

For the same VM, the new compression is:

So what about dividing your backup time by 2 and still using 50% less storage? Just switch to XCP-ng :)

Another image, CPU and network usage in this exact scenario, between GZIP and the new compression. Remember, it's the same VM we export twice: 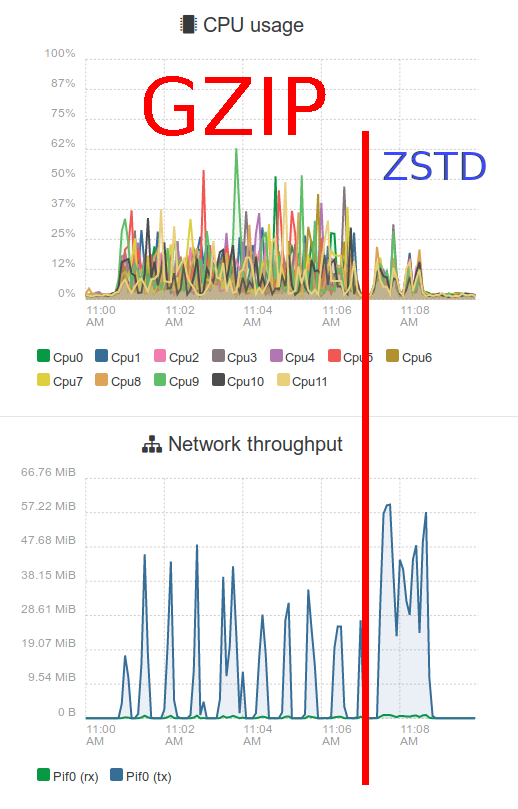 And that's not all!

Making backups faster is great, but what about the restore speed? Same platform, here is the results:

It's simple: restoring using the new compression format is more than twice as fast. So in short, in the event of a problem, your recovery time is divided by two. And still using smaller files.

Xen Orchestra will be the first and unique backup solution supporting these enhanced compressed backups. Just go into your backup view, create a job and select the "zstd" method:

Note: this feature will be available in the next weeks, stay tuned!

Are we going even further? Yes. We'll also work on implementing compression on the VDI level, so your Delta Backups and Continuous Replication speed will be doubled. Want an example? Let's export a VDI into an NFS share (1GBit/s network):

It's half the exported size and twice as quick total transfer time. In the end, this means twice as fast delta AND faster Continous Replication.