This time, it's not a news about Xen Orchestra, but a benchmark of virtualization modes: PVHVM vs PV. When I saw the numbers from Rackspace, well... I choose to do my own tests here, despite it's in other context (small test lab). We'll (re)explain concepts first, then our test protocol and at least the results.

XenServer and PV or HVM

It's not complicated to create PV or HVM Debian (or derived) guest in XenServer: if you install a VM with its associated template, it will be by default a PV guest. For an HVM guest, you'll use "Other install media".

That's all! If you want to know in which mode you are, here is the tip for Debian: go in /etc/default/grub and put "GRUB_CMDLINE_LINUX=loglevel=9". Reboot it, and read the dmesg output, you shall read something like:

This is the first run with UnixBench, more bench will come with I/O and network soon. Our test platform consist of:

All benchmarks are done after a fresh install.

Two modes are used for UnixBench (in fact the default mode, started by ./Run) : first is a single test pass and the next one is a 4 parallel copies of tests.

Those results are totally coherent with the original benchmark, done by Rackspace.

UnixBench running in Debian PVHVM mode offers respectively 205% and 128% performance boost over PV. In other words, UnixBench says that Debian in PVHVM is 2 or 3 times faster than Debian PV.

This time, in "real" condition, a Kernel compilation, we saw that PVHVM can do the task 15% faster. Not bad! 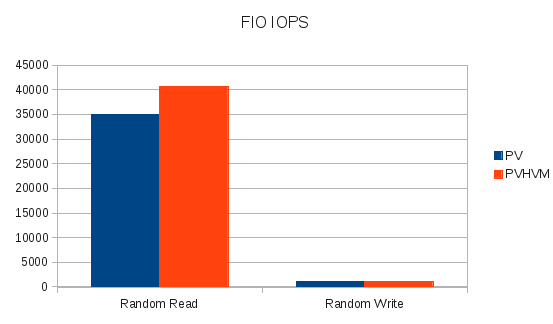 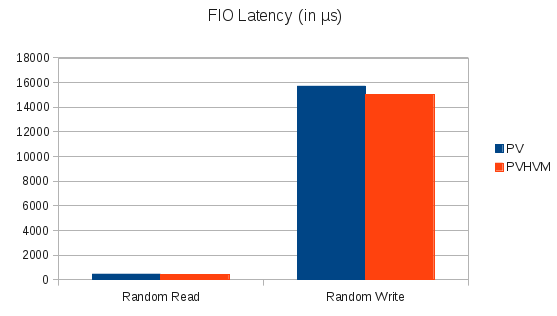 We can tell that PVHVM brings a clear bonus in Random Read configuration (+16% than PV), which is pretty consistent to the Kernel compilation time benchmark. In Random Write, it's very close (+5% max).

Not displayed here but also important, the latency were slightly reduced on PVHVM guest (14% faster in r-read and 4% in r-rwrite). CPU load is also a bit lower: only good news here!

7-Zip compression doesn't seem to be impacted by PVHVM mode.

But it's not the same for SQLite database! PVHVM is 15% faster than PV.

PHP gets a small performance augmentation in PVHVM (5%).

PVHVM Debian Xen guests running modern hardware are faster than "classical" PV.  And as Debian embed in its current kernel all the needed drivers (PVHVM work out of the box), you can get more performance for your current Xen or XenServer infrastructure for a small cost.